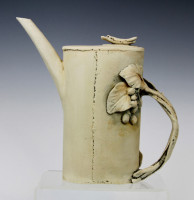 Una Mjurka was born in Riga, Latvia. She received an Artist Expert degree from Riga Applied Arts School and a BA in Ceramics from Art Academy of Latvia. In 1994 Mjurka moved to the U.S. to continue her education at Humboldt State University (Arcata, CA) and subsequently earned an MFA in Spatial Art from San Jose State University (San Jose, CA). She has exhibited extensively throughout the U.S. (in nearly twenty states) and participated in shows in Australia, Austria, China, France, Spain, Lithuania and her native Latvia.

Growing up during the Soviet era was a unique experience that has influenced Mjurka’s creative work and outlook on life. Triggered by her past, Mjurka developed an interest in exploring human nature and conditioning through the prism of Maslow’s pyramid of psychological needs, categorized in two distinguished groups such as “basic” and “being” needs. Through her work Mjurka celebrates the beauty and simplicity of mundane rituals fulfilling the basic human needs, simultaneously making a reference to the widespread consumerism plaguing today’s society.

It was a tremendous honor to be recognized at this level by my peers and the community I had become a part of after relocating to the US from my native Latvia. It was particularly touching to receive this award together with Stan Welsh, my former professor and mentor.

Currently I am an Associate Professor at California State University, Fresno. Certainly, over the years my work has changed and evolved; the subject matter I address has shifted to exploring the landscape, both external (actual) and internal (psychological). I also have become interested in the issues associated with globalization, such as immigration and emigration, demography, and environment.

Stay true to yourself and don't compromise within your work.

It is very inspiring to see that despite the recent crisis in global economy, an immense amount of innovative and conceptually rich work is being created across the world. However, as an educator I also witness and experience first hand how underfunded the education in arts has become.