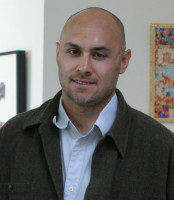 Peter Nathaniel Malae is the author of the novels, Our Frail Blood (2013), an epic about the dissolution of an American family in three generations; What We Are (2010), a New York Times Editor’s Choice, winner of the San Francisco Foundation’s Joseph Henry Jackson Award and a finalist for the Pacific Northwest Book Award; and the story collection, Teach the Free Man (2007), a finalist for the New York Public Library’s Young Lions Fiction Award, the Glasgow Prize and a notable book selection by the Story Prize.  He is a former John Steinbeck, Arts Council Silicon Valley and MacDowell Colony Fellow.

In all practicality, it meant paying my rent and back rent. Personally, it meant a hell of a lot to me because San Jose is my home, where I was raised, went to school, played sports, etc. As I wanted to write a novel which captured the South Bay ethos, it was thus cool to see South Bay judges endorse my work. Later, when I got a two-book deal with Grove/Atlantic, my agent was able to use the legitimacy of the fellowship and other awards I'd won as contract leverage. Plus, I got to read at the Triton Museum, outside of which I used to play tackle football with my brother and friends as kids!

I continue to write 500 words every day, a discipline I've maintained since May '99. I've published a story collection - TEACH THE FREE MAN, which was a finalist for the New York Public Library's Young Lions Award and a Story Prize notable book; also two novels - WHAT WE ARE, a New York Times Editor's Choice and San Francisco Foundation Joseph Henry Jackson Award winner, and OUR FRAIL BLOOD. I have two finished poetry manuscripts I'm shopping around; a finished short story collection I'm shopping; a finished screenplay I don't know at all what to do with; I'm one scene from finishing my first play and I'm working on two big novels presently. I don't know that my art has evolved or changed, but I'm maybe too clogged up to say one way or another.... Go here to see (and buy) my books: http://www.peternathanielmalae.com/#!books/cnec

Consider, and then directly address, the meaning of the long haul.

Here in Oregon: muy blanco. Here in America: in need of a center. Out in the World: too vast and diverse to qualify in 5,000 let alone 5 words.