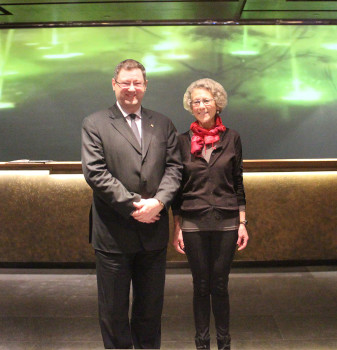 This is a world of visual over-stimulation. Much of it we become inured to and barely perceive. Eckland crafts videos to represent the unconscious synthesis that takes place in each of us as we absorb that endless stream of ambient information, direct and peripheral; her videos equip us to cope with, transform and utilize the bits of information that we are constantly absorbing. By layering, abstracting, and moving freely along the continuum of time, images in her videos dissolve, elide, conflict, develop. Perceptions are brought into focus.

In Eckland’s work, the lens becomes a microscope, under which a single subject may be captured to honor the ebb and flow of movement and the subtle inherent changes; or a complex palette of seemingly unrelated images may be edited together in conceptual harmony. No matter what form the videos take, she defuses preconceptions that tired familiarity with the many genres of moving media can engender by bringing the sensibility of painting, altered photography or experimental film to the works.

Eckland’s videos are non-narrative pieces in the sense of any linear storytelling. Rather, they have the form and structure of poetry or a music composition. They are metaphoric, almost dreams, with repetition used like a refrain or a chorus. Interpretation, including associative narrative, becomes a collaboration with the viewer. To enhance this experience of collaboration, Eckland designs her video installations as immersive environments, and installs her work site-specifically.

Because the allusive nature of these pieces requires the attention, experience and creative imagining of the viewer to make their own connections and devise their own stories, sound is always integral to and fully integrated with the video, much as in music videos or film scores. Eckland collaborates with several composers who create original music for the works, in a process that is an ongoing dialogue with the visuals as each piece is being created. Utilized in a variety of ways, the sound becomes one more carrier of information to the senses, adding layers of subtext to the visual images and creating a more evocative, immersive experience.

Eckland has exhibited throughout the U.S. and internationally and finds it particularly gratifying to discover the connection that viewers in countries as diverse as Costa Rica, Kazakhstan, Germany, Singapore, Turkey, The Czech Republic, United Kingdom, and China have made with the work. Some universal language seems to be communicated, some global core touched. Or as Kenneth Baker has said in one of his many insightful reviews of Eckland’s work over the past few years in The San Francisco Chronicle, “Eckland handles video like the medium of collective dreams that we share without knowing it. Apparently she wants us to know it.”

It was wonderful validation that my work was appreciated, and a very special opportunity to exhibit at the Triton Museum and get to know Deborah Kennedy and Flo Oy Wong, the two other recipients that year who are such inspiring artists.

I am a full-time artist, working now in video rather than photography. I am still doing immersive installations of image and sound that I now exhibit around the world. Moving to video from slide projection was a logical and expansive evolution. To view some of my recent work, go to: http://www.rutheckland.com/video/

Network - there are so many avenues to get your work out into the world (if that is your goal).

Invigorated by technology and collaboration.