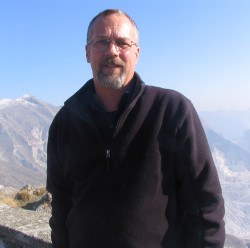 Jaap Bongers is a practicing artist who has had many solo exhibitions in the United States, Holland, Sweden, and Denmark. He has authored a number of publications and has received many public commissions for his art. Born in Holland, he was educated both there and in Italy. He attended the Stads Academy of Fine Arts in Holland. This five-year, full-time (8:30 a.m. to 5 p.m.) program provided rigorous training in a broad spectrum of arts.

Following this training, Bongers studied for a year at the Acadamia di belle Arti di Brera in Italy. Immediately thereafter he was accepted as a student at the Jan van Eyck Academy of Fine Arts in Holland. This prestigious two year program accepts only eight students out of 400 applicants per year. Following that experience, Bongers was given a grant by the Dutch government to study traditional tribal art and customs, as well as architecture, in Zaire. Three years later he returned to Zaire to study and live with a Pygmy tribe.

Coming from Europe, for me it was a sign of acceptance in the art community here.

My art has evolved. It is still very much 3-D but mostly photo based. I still teach at Harker Academy in San Jose, where I?m also Chair of the Art Department. Here?s a recent article that appeared in the Harker Quarterly: http://news.harker.org/art-instructors-annual-trip-aids-needy-children-in-africa/

Don't join the rat race. Create what you are passionate about. Don't emulate the work of other artists.

Locally: the ICA is wonderful and the Art Museum is still unfriendly to the local artists. Nationally: too much technology for my taste (often too easy)