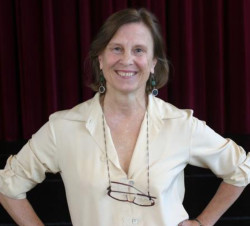 After completing a B.F.A in Theater (Ohio University) and an M.A. in Dance (University of Illinois, Champaign-Urbana), Diane Frank taught for four years in the Dance Department at the University of Maryland, where she was a founding member of the Maryland Dance Theater. She then moved to New York City to begin an eleven-year career with Douglas Dunn and Dancers, touring nationally and internationally. As a scholarship student, she was invited by Merce Cunningham to join the teaching staff of

After completing a B.F.A in Theater (Ohio University) and an M.A. in Dance (University of Illinois, Champaign-Urbana), Diane Frank taught for four years in the Dance Department at the University of Maryland, where she was a founding member of the Maryland Dance Theater. She then moved to New York City to begin an eleven-year career with Douglas Dunn and Dancers, touring nationally and internationally. As a scholarship student, she was invited by Merce Cunningham to join the teaching staff of the Merce Cunningham Dance Studio, where she taught for eight years. At Cunningham’s request, she taught both technique and repertory at the American Center’s Atelier Cunningham in Paris. A frequent guest teacher at the Paris Opera, she assisted Douglas Dunn in both the creation of new work for the Opera and the setting of established repertory. Frank has been the recipient of seven NEA Choreography Fellowships for collaborative choreographic projects with Deborah Riley, as well as commissions from the Jerome Foundation, DTW, Dance Bay Area, and Meet the Composer, and Arts Silicon Valley. Her work has been performed both in the United States and abroad.

At Stanford since 1988, Frank teaches intermediate and advanced modern technique, choreography, and mentors graduate and undergraduate student dance projects. She organizes and advises Stanford’s student participation in the American College Dance Festival as well as other Divisional dance education and performance projects on- and off-campus. She is the Co-Director of the Dance Division’s annual concert. She also organizes numerous choreographic commissions by guest artists for Stanford student dancers, frequently acting as Rehearsal Director, setting and maintaining works by choreographers as diverse as Elizabeth Streb, Holly Johnston, Brenda Way, Parijat Desai, Hope Mohr, Janice Garrett, among others. In 2005, she played a significant role in the development of Stanford Lively Arts’ campus-wide interdisciplinary arts event “Encounter: Merce,” organizing its “Music and Dance by Chance” commissions, as well as an IHUM lecture series on Cunningham’s video dances and concert repertory. She has twice taught Cunningham repertory in Stanford workshop classes.

Frank has been instrumental in developing a number of residency projects and artistic collaborations for the Dance Division. Highlights include: the repertory reconstruction project of Anna Halprin’s “Myths”; Hope Mohr’s “Under the skin,” a collaborative performance project bringing together artists, physicians and residents from the Medical School, and community performers; Elizabeth Streb’s “Crash” performed with Streb’s company on Stanford’s Memorial Auditorium stage; and “Cantor:Rewired,” site-specific outdoor iterations of Parijat Desai’s work fusing Southeast Asian classical Indian dance with post-Modern choreographic strategies. Originally performed throughout the galleries and grounds of Stanford’s Cantor Arts Center, this work was most recently performed at San Francisco’s Asian Art Museum in May 2010. in Spring 2010, she assisted Ann Carlson in the organization of her walking performance event, “Still Life with Decoy”. In 2011, she is assisting in the reconstruction of Anna Sokolow’s signature masterpiece, “Rooms”. Frank also teaches “The Duets Project,” a performance class that examines partnering through duet repertory. Strongly interested in site-specific performance, Frank has taught the theory course “Figure/Ground: Site-Specific Dance Performance in Outdoor Environments.” Complementing this course, she conceived and organized “Red Rover,” a series of commissioned site-specific dance performances traveling the grounds of Stanford campus. Frank instituted and currently directs the Firework Series, a quarterly informal showing of student work followed by discussion among artists and audience. She also conceived and organized the Bay Area Dance Exchange, a day-long intensive hosted by Stanford for Bay Area college and university dance programs; eight schools gather to share studio practices, creative processes, and performances of works. Frank’s recent choreography includes the site-specific duet “Cleave,” from which she developed a video dance with film maker David Alvarado, as well as “Sea Change,” a series of duets. Her current work, “Twilight Composite” will be performed at the American College Dance Festival in March 2012. Frank is a frequent guest teacher at Bay Area dance studios, colleges, and universities. A strong proponent of arts education, she consults and volunteers in the development of dance and live arts activities for public schools and the community. She has also directed the Dance Division’s summer dance intensive for high school students through US Performing Arts. Frank is Acting Director of the Dance Division for the Academic Year 2011-12.

This award was a validation of the quality of work I was doing, as well as a sense of belonging to the community of artists to which I aspired to belong.

I am still choreographing, teaching, and organizing within both the professional dance community and within dance education at the university level. I am more aware of the kind of through-line and lineage to which my work belongs. I am aware that my work with young dance artists is a contribution to the ongoing emerging generation. I am still working project to project. I am, after a long stretch, involved in performing again - differently, of course, from my years as a young dancer.

Work daily and persist. Go see everything that your peers are doing, and put yourself next to master artists whenever you can - as teachers, collaborators, co-conspirators - because they will elevate your work by challenging you to dig deep. 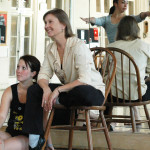 Your email address will not be published. Required fields are marked *

MADE POSSIBLE WITH SUPPORT FROM